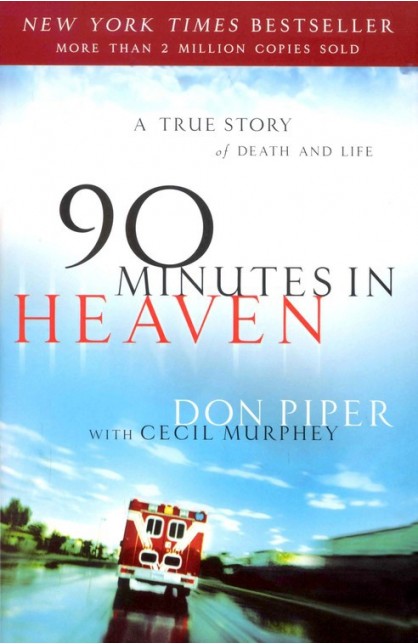 
On a Wednesday morning in 1989 Pastor Don Piper died in a head-on collision, awaking in Heaven where he experienced the glories he had long preached about. Ninety minutes later, prayer brought him back to life, and the next time he awoke it was to a world of unimaginable pain, depression and anger. This is the story of Piper's healing and his journey to finding the answer to his most agonizing question: Why had God let him live?

Publisher's Description
As he is driving home from a minister's conference, Baptist minister Don Piper collides with a semi-truck that crosses into his lane. He is pronounced dead at the scene. For the next 90 minutes, Piper experiences heaven where he is greeted by those who had influenced him spiritually. He hears beautiful music and feels true peace.


Back on earth, a passing minister who had also been at the conference is led to pray for Don even though he knows the man is dead. Piper miraculously comes back to life and the bliss of heaven is replaced by a long and painful recovery.


For years Piper kept his heavenly experience to himself. Finally, however, friends and family convinced him to share his remarkable story.

Author Bio
Don Piper has been an ordained minister since 1985 and has served in several capacities on church staffs, including six years as a senior pastor. Don has appeared on numerous Christian and secular television and radio programs and has been the subject of countless newspaper and magazine features. He writes a weekly newspaper column as well as preaching and leading conferences and retreats across the United States and abroad. He and his wife Eva are the parents of three grown children and live in Pasadena, Texas.


Cecil Murphey has written or coauthored eighty-nine books. He's won a number of awards for his writing, including the 1996 Gold Medallion award for his collaboration on the autobiography of Franklin Graham, Rebel with a Cause. The coauthor of the bestseller Gifted Hands with Dr. Ben Carson, Murphey resides in Atlanta, Georgia.

Be the first to write your review !