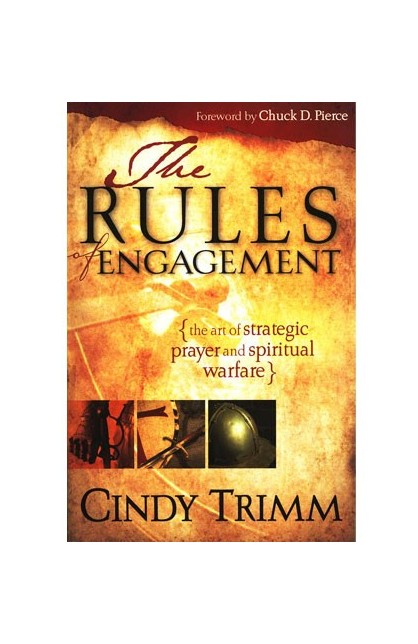 THE RULES OF ENGAGEMENT

The Rules of Engagement
By Cindy Trimm

Many people lack the confident to make a stand against the powers of Satan. The Rules of Engagement contains bold, in-your-face principles for strategic prayer and spiritual warfare and makes getting in the devil's face and defeating his strategies a possibility for everyone. It includes declarations for engaging the enemy armed with God's power and authority to defeat him and emerge a conqueror. It helps the reader to recognize the principalities and subordinate spirits that operate in the kingdom of darkness, and it shows the reader how to expose the weapons of warfare and be victorious.

From the Back Cover Beat the devil at his own game and wage warfare with confidence!

There is a spiritual battle going on, and prayer warrior and intercessor Cindy Trimm has given you a manual to wage effective warfare. The Rules of Engagement helps you recognize the spirits that operate in the kingdom of darkness and gives you declarations for engaging them armed with God's power and authority.

It is time to take a stand against the powers of Satan. Using the authority you have been given by God, you can enter the realm of prayer-power where...

· Strongholds of the enemy are shattered.
· Households, neighborhoods, and cities are radically changed for the good.
· Situations that once meant defeat are turned into victory.
· The enemy loses his power over your life.
· Your true authority as a believer is unleashed.